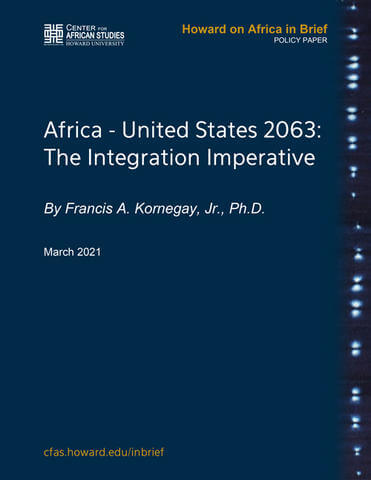 Howard on Africa In-Brief
A publication of the Center for African Studies, Howard University

This commentary was written for the HU Symposium on Re-shaping US-Africa Policy and the Role of HBCUs which took place on February 19, 2021.  The author contextualizes US-Africa policy, particularly around trade, historically and offers three key recommendations for US-Africa policy moving forward:

This brief analysis attempts to relate in historical and contemporary perspective, looking into the future, challenges facing Africa within the global strategic context and consider how US policy toward the continent may require reconceptualizing. Although my brief is to address the US-Africa trade track record, I will range a bit more broadly; this is in contextualizing trade as a major if not the centerpiece component of pan-African continental integration, but also as a trajectory occurring within a dynamic geopolitical landscape of external influences interacting within the complex inter-African terrain of the African Union (AU).

In so doing, the basic point is to work toward an Africa policy prioritizing the strategic and geostrategic over the programmatic in as much as we already have a proliferation of Africa programs, some with more strategic significance and potential than others, none perhaps, more so than in the area of trade and the future of the African Growth and Opportunity Act (AGOA); this is at a time when the African Continental Free Trade Area (AfCFTA) has been launched. This is an area that strategically relates directly and urgently to the regional and continental integration imperative in defragmenting the colonial political map of an Africa of interdependent states of varying degrees of viability. Within this context, it is urgent that national sovereignty becomes shared sovereignty. This challenge, in turn, is at the very heart of the AU’s Agenda 2063 which aspires to transform the continent in anticipation of the Centenary of the AU’s founding predecessor, the Organization of African Unity (OAU).

Agenda 2063 then should inform US-Africa policy in keeping with the AU’s aspirational aims of the Continental Free Trade Area forming the integrationist centerpiece for realizing the African Economic Community (AEC) as laid out in the Lagos Plan of Action. This is where the Biden administration might consider focusing efforts within a context informed by the need to strategically as well as programmatically transition AGOA into a US-AfCFTA relationship that also factors in the fast-changing global geoeconomic and geopolitical landscape of trade. Given the complexity of this challenge, the Biden administration should, in conjunction with the AU and the UN Economic Commission for Africa (ECA), begin engaging the CFTA secretariat in Accra headed up by South African Wamkele Mene in a post-Agoa dialogue of transition into the next phase of Africa-US trade relations. This should factor in a strategic role for the AU’s regional economic communities (RECs). Such a dialogue would necessarily unfold against the backdrop of reviewing how Africa has benefited from Agoa while reversing the bilateralism of the Donald J Trump administration’s highly politicized Africa trade agenda into one placing the CFTA at the center of US-Africa trade strategy.

The Trump administration’s bilateral “trade reciprocity” approach in negotiating a trade deal with Kenya represented what was promising to unfold as a set-back for African trade integration in moving beyond the unilateral trade preferences of Agoa. As a recent Brookings Institution analysis noted: “Although these negotiations could produce the first bilateral trade agreement between the U.S. and a sub-Saharan African country, a shift from the regional preferential trade agreements to bilateral free trade agreements could undermine the growth of smaller countries, who may not be of enough economic interest to the United States. Bilateral agreements could also undermine efforts to create a regional economic bloc through the African Continental Free Trade Area (AfCFTA).” Indeed, Kenyan President Uhuru Kenyatta’s decision to strike out on his own in spite of the CFTA generated no small amount of controversy within Kenya’s trade community and in Africa as a whole. If Kenyatta’s disruption of the fledgling CFTA was not controversial enough, the Trump administration’s reported conditioning of the trade deal on Nairobi adopting a higher profile pro-Israel posture amid Trump’s Israel ‘normalization’ drive added additional fuel to the fire in reflecting Trump’s unprecedented level disregard for Africa; and this is not to mention his veto of Nigerian Ngozi Okonjo-Iweala to head up the World Trade Organization, leaving WTO in limbo until recently rectified by Biden.

It is too early to discern where the Biden administration may be headed in Africa policy although suspending bilateral trade negotiations with Kenya ought to be an obvious place to start pending the administration staffing up its Africa team at State Department and undertaking a thoroughly comprehensive review of the Trump agenda and initiatives. However, it seems safe to venture that the outgoing administration’s Africa agenda had much to do with its pro-Israel Mideast priorities in close collaboration with Egypt, Saudi Arabia and United Arab Emirates in pursuit of its destructive ‘maximum pressure’ campaign against Iran as it had to do with Africa. Hence, its decision to violate international law and consensus in recognizing Moroccan sovereignty over Western Sahara, its bolstering of the military wing of Sudan’s fragile transitional government in maneuvering Khartoum into ‘normalizing’ with Israel in exchange for de-listing it as a state sponsor of terrorism, suspending aid to Ethiopia to force Addis into concessions to Egypt in mediating the stalemate over future operationalizing of the Grand Ethiopian Renaissance Dam (GERD) -- and making the already problematic trade deal with Kenya conditional on high profiling Nairobi’s already normalized relations with Israel.

Reversing these Trumpian geopolitical complications for Africa’s strategic autonomy and integrity in relation to the Mideast and specifically, Persian Gulf sub-imperial aims, cannot be separated from a broader strategic agenda advancing the continent’s aspirational 2063 economic integration revolving around CFTA implementation. An equitable compromise in resolving the Western Sahara stalemate could kick-start the Arab Maghreb Union as a functioning regional economic community within the AU system and CFTA. Resolving the GERD standoff between Egypt, Sudan and Ethiopia in conjunction with securing Sudan’s civilian democratic transition while supporting Ethiopia’s democratic consolidation and stability are, all combined, crucial to advancing the ‘Cape to Cairo’ eastern and southern African Tripartite FTA component of the CFTA. This, in turn, has wider Afro-Asian geo-strategic economic potential of convergence with mega-trade trends in the East Asia/Indo-Pacific where Biden will have to revisit what is now the Comprehensive Trans-Pacific Partnership on the one hand, the Regional Comprehensive Economic Partnership on the other, both of which factor in the Association of South East Asian Nations (ASEAN) economic community. With Africa’s demographic dynamism set to eventually overtake both China and India in population by mid-century, a CFTA-ASEAN Indian Ocean geoeconomic convergence could reshape the global strategic landscape. But let’s not leave out the Atlantic where, if Biden can overcome the foreign policy establishment’s North Atlantic bias in favor of a whole of transatlantic vision, CFTA relevance enters the equation as well. As such, Africa’s diaspora as well as Africa itself has a major stake in affirmatively promoting accelerated regional and continental integrationist evolution.

How might these projections inform US-Africa policy and Africa-US relations?  Perhaps, a closer diplomatic and aid US-AU relationship might be the place to start given Washington’s posting of an Ambassador to the AU and an AU ambassador posted in exchange to the US. However, it is not clear how deep this relationship is and whether or not it might be upgraded into the centerpiece of US-African relations in a manner also factoring in a greater role for the AU’s regional economic community (REC) pillars. These are in need of major strengthening and capacity-building as well as rationalizing as building blocks for accelerated continental free trade implementation. This where new Chairman of the House International Relations Committee, Black Caucus member Gregory Meek’s suggestion should serve as a starting point. Meeks recommends the following: “We should establish dedicated US embassy country teams for the Regional Economic Communities, separate from the bilateral mission and staffed by representatives from the state department, US Agency for International Development, the department of defense, and the commerce department. America will not be relevant if we’re not present in these bilateral and multilateral fora.” (italics added)

In relating such a RECs outreach to a post-Agoa transition, might it not be possible for such a transition into a CFTA-US agreement to involve regionalizing the Agoa forum within the regional economic communities? Hence, the possibility for the Biden administration engaging the AU and its triumvirate governing partners in ECA and the African Development Bank (AfDB) in establishing a high-level AU-US Integration Forum accompanied by regional economic community-US forums for dialoguing and brainstorming possible differentiated regional phasings of Agoa into a US-CFTA architecture. Here, African ‘lessons learned’ from the highly disruptive Economic Partnership Agreements (EPAs) experience imposed by the European Union might serve a valuable purpose in informing how the US and the AU in conjunction with ECA and AfDB might proceed in arriving at an equitable Africa-US trade regime accelerating continental integration into the eventual African Economic Community. Perhaps a US envoy to the CFTA in Accra liaising with the US ambassador to the AU in engaging ECA and AfDB as well might be considered a possible nexus of US-AU diplomacy.

While this presentation is limited mainly to Africa-US trade relations, the same template might also serve a purpose in the peace and security sphere as well. Operationalizing the AU African Peace and Security Architecture (APSA), including its maritime dimension, is critical to stabilizing Africa’s complex and fragmented inter/intra-state landscape for advancing economic integration within CFTA. However, US-African relations should not be approached in isolation from overall global strategic security as well as geoeconomic dynamics. A new cold war-style scramble for Africa must be avoided. Given the continent’s demographic trajectory, an integrated Africa can be viewed as increasingly central to a more stable global governance federalism of regionally interdependent nation-states within international system where conserving the global commons on land and sea mandate the pooling and sharing of sovereignty. Such a calculus might inform how America views the future of its own hemisphere in north-south transatlantic terms as well as in relation to the Asia-Pacific. Africa’s future figures significantly in both equations as does America’s. This shared future should be a post-primacy global peace and cooperation pluralist order rooted in Africa’s Agenda 2063. Hence the need, not only for a new and more dynamic US-Africa policy but, more broadly, for a reconceptualized US foreign policy and national security strategy overall and in synergy with America’s domestic renewal imperatives -- and finally, for a more decisive African-American intellectual input in reshaping American foreign as well as domestic policy priorities and their execution.

Acknowledgements:
Howard on Africa in Brief is published by the Center for African Studies at Howard University. Contributors include prominent scholars, policy makers, Howard faculty, alumni and graduate students. Our papers provide open access to research and make a global contribution to understanding Africa-related issues. The views, positions, and conclusions expressed in this publication are solely those of the author(s).