More widely shared than coffee or wine, tea is the world’s most socially shared drink. Join us for our event series to learn about African Tea Traditions.

What is the most popular drink in the world after plain water? It’s tea! More widely shared than coffee or wine, tea is the world’s most socially shared drink. Tea even has its own time zone, “Tea Time.” True tea (made from the leaves of the Camellia sinensis plant) originated in China thousands of years ago. True tea contains caffeine and is distinguished from herbal teas, beverages made from the infusion of herbs, spices or other plant material that is entirely caffeine free.

Tea is widely consumed all over the African continent where it is integrated into a myriad of cultural feasts and ceremonies. Chai (black tea with milk and spices) is popular in East Africa. Red Bush or Rooibos (an herbal tea) reigns supreme in Southern Africa, Bisap also known as Kirkade, made from hibiscus, is a favorite in West and North Africa. Mint tea is widely consumed in North and West Africa alike.

Events of the Series 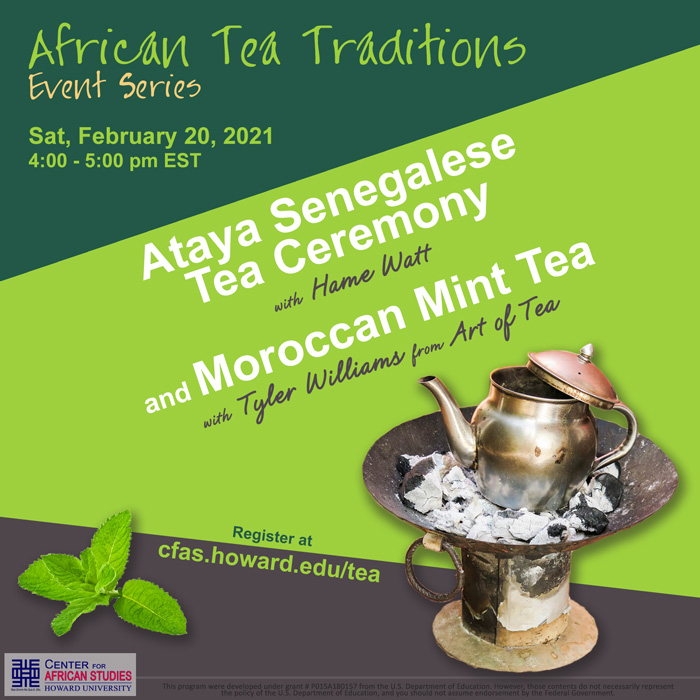 Our first presenter, Hame Watt, will introduce the Ataya Senegalese Tea Ceremony and demonstrate how to prepare and serve the tea which is made with gunpowder green tea, sugar, and mint. He will provide information on the history of tea and share his experience of tea from different countries. Our second presenter will be Tyler Williams from Art of Tea. He will offer background information on Moroccan Mint Tea. This tea will be included in tea kits sent after the event to the first twenty people in the U.S. who register and attend courtesy of the Center for African Studies, Howard University. 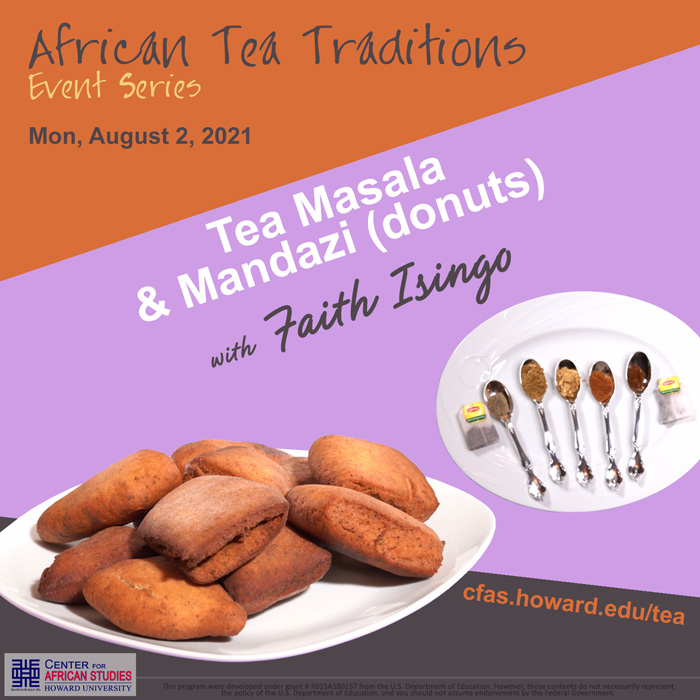 This is the second in our series on African tea traditions. In these videos, our presenter Faith Isingo will demonstrate how to prepare tea masala, a blend of black tea, honey/ sugar, spices and milk, and mandazi, a sweet donut-like snack.

Faith Isingo was born,  raised and educated in Tanzania. She became interested in cooking at the age of thirteen.  She loves preparing dishes from Tanzania and other countries. She currently works as a Nurse Assistant and owns a catering business.

More events in this series are coming soon!