In this essay, Ellen Olmstead and Cinder Cooper Barnes, both professors of English at Montgomery College and participants in the 2017 CAORC-WARC Faculty Development Seminar to Senegal, discuss the lasting impacts of their West African experience and the importance of providing study abroad opportunities to community college faculty and students.

When Ellen was a kid, extended periods out of school were breaks—just that—not vacations in the sense of going out of town for even one overnight. Friends who went away during time off fueled her wanderlust. She did not have enough money to participate in study abroad, which was considered an essential experience at her college. As many first generation, working-to-put-ourselves-through-school students do, she fantasized about flying pretty much anywhere in the world. The yearning was quenched in her 30s when she was awarded a fellowship to travel and study in Southeast Asia. During her postsecondary teaching career, she endeavored to learn more about the communities surrounding the community college where she taught. First, this led her to focus on Cambodia and Laos. Later, to focus on West Africa. By the time she came to Montgomery College, her bias for Senegalese film and literature was airtight. 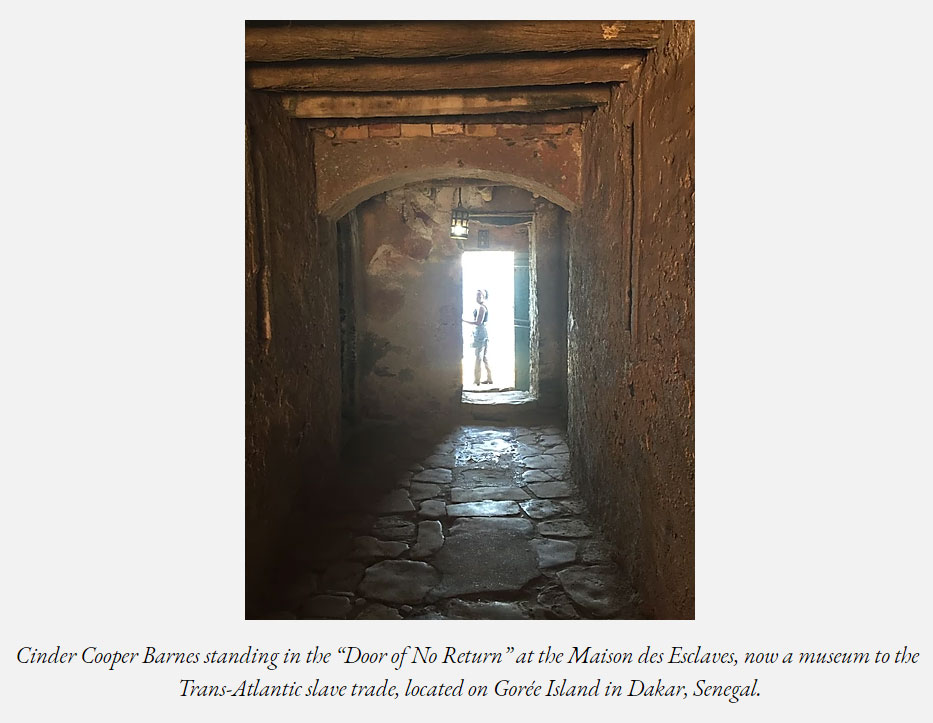 Cinder, similarly, didn't travel abroad until her 30s. Attending a conference in Oxford, England, was the beginning. The turning point was when she taught English in Macau through a partnership Montgomery College has with Macau Millennium College. Independent and across the world, she realized she could go anywhere and immediately made a long list of future destinations. Since the initial foray to Oxford, she managed to travel to various locales including India and Iceland. But Africa, particularly West Africa, called to her. As a descendent of slaves, she is very interested in the history and culture of West Africa, the connections with the American South, and the institution of slavery; the study of all three are both personal and academic to her. For Cinder, the motivation was deeply personal: returning to the Motherland. She often told Ellen how she yearned to be in a country—for just a little while—where blackness has no baggage, it just is.

Almost reflexively, when CAORC announced a trip to Senegal specifically for community college and HBCU faculty, we applied. CAORC and Howard University’s African Studies Program allowed us to delve into Senegal’s rich history, and lecturers from the West African Research Center and Cheikh Anta Diop University ensured that we saw different facets of Senegal—its art, cinema, music, politics, and religion. We were given exposure to all. Over our collective 40 years of teaching at community colleges, we have become ever more grateful for the CAORC fellowship and likewise painfully aware that such opportunities are rarely available to community college students and faculty. 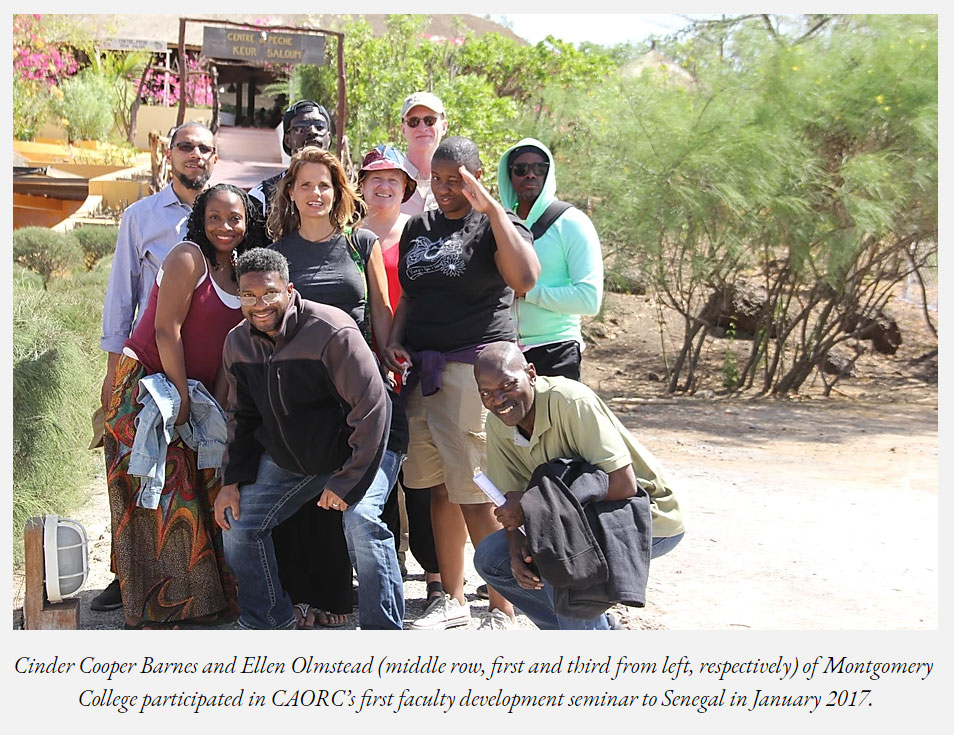 From our experience in Senegal, we gleaned that simply preparing for and embarking on such travel could be a powerful learning experience. For both of us, the beautifully chaotic culture shock of travel abroad is an experience all should have. Each day in Senegal, we started envisioning new learning opportunities for our students. Never before did we consider developing a study abroad proposal. Yet, when we returned from Senegal, we designed a study abroad program that we hoped would have the same impact on our students as the CAORC experience had on us. Access mattered to us, and so did the knowledge we gained in Senegal. We determined that England in January would be the least expensive place and time, would not interfere with summer employment (a necessity for our students), would pose no limitations as English is the common language and the culture is similar, and would offer an opportunity to make connections between countries involved in the triangular slave trade—areas of interest for both of us that were heightened by our time in Senegal.

We wanted our trip—entitled "The London We Don’t Know: Celebrating the Black Experience Outside of the United States”—to speak to our diverse student demographics so that they could see themselves and their place in the world through different lenses. With scholarship funds available for some applicants, we were able to extend the opportunity to students who had a range of experiences. One young woman was a single mom; another was the first person in her family to travel out of state, to get a passport, to get on a plane. One student had never traveled on a plane, but her family had traveled here from Central America by foot and bus. Some students had never left the US. These students, all but one black and brown, experienced a flood of firsts. 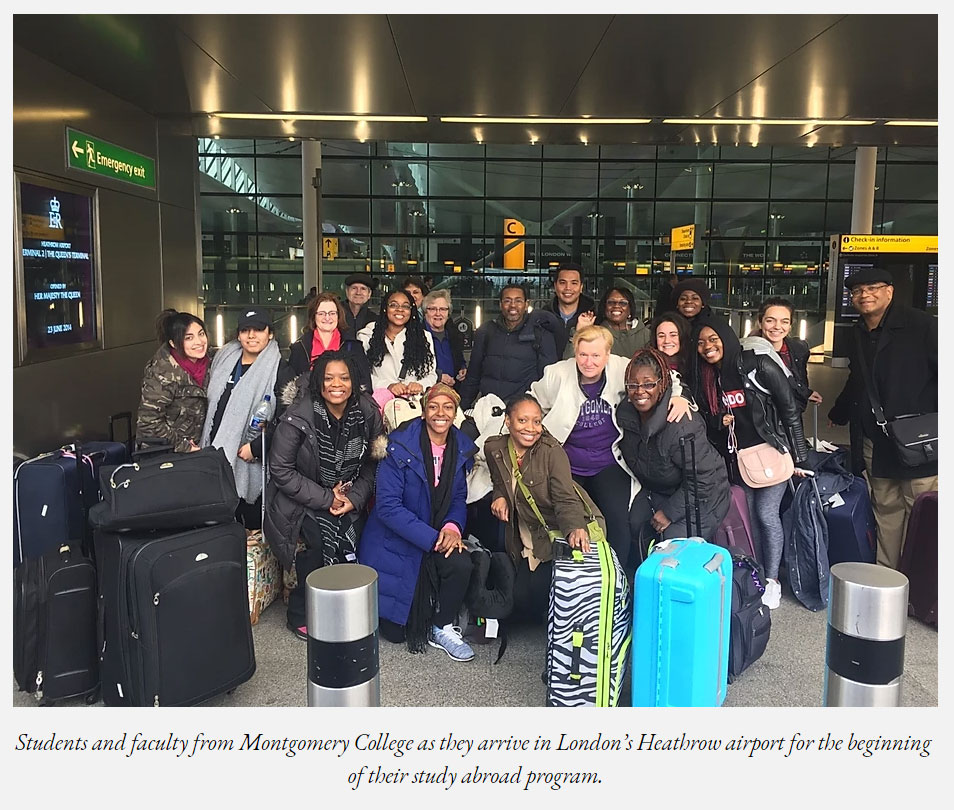 Through our visits to historical sites and museums, discussions with our guide and community experts, and our quotidian observations as we moved through London and Liverpool, we examined how race functions in the two societies to see if there were some lessons we could take away about how to address racism and the legacy of slavery. Our students were intrepid, venturing across the city when we needed to collapse in bed. Their senses, owing to this being their first experience in an unfamiliar place, were a million times magnified. Riding on the bus, we often heard random and uninhibited comments from them that caused us to look again or more carefully.

For example, at the British Museum, a guard assigned to watch over the collection of African art stepped close to the students while they were in the gallery. The students' assumption was that the guard was suspiciously studying them because they were black. It turned out, however, that the guard was hearing them talk, became fascinated because she hadn’t paid attention over months she had stood guard in that hall, and they shared with the guard their impressions and appreciations for the objects. At the museum of the Docklands, they were struck by Britain’s casting Indians as black, too, and the African-Asian composition of each era’s activist leaders and civil rights movements. For all the rainbows flying over American marches, such an alliance here seems inconceivable.

We discussed the historical and cultural reasons for the differences between Britain and the United States in this regard. Ultimately, the goal was to analyze, with Britain as a foil, elements of white supremacy and black triumph. All of the participants articulated that the England they saw was much more diverse than American television reflected. All were moved by the monuments erected to acknowledge the Africans who were exploited or killed through the slave trade and their struggles for equality, especially given the battles being waged in the US over preserving symbols of the Confederacy whose bedrock was slavery. All felt a sense of pride in the black experience in Britain.

For us both, walking along the docks of Liverpool in the company of octogenarian Eric Lynch, a black Briton whose family hails from Jamaica, as he provided a history of how the city's wealth derived from slave trading, we experienced a sense of connection to the CAORC trip to Senegal. There, we stood on the threshold of the Door of No Return in Gorée. In Liverpool, we looked from the docks of the European capital of the Trans-Atlantic slave trade upon dark and cold waters also of the Atlantic. 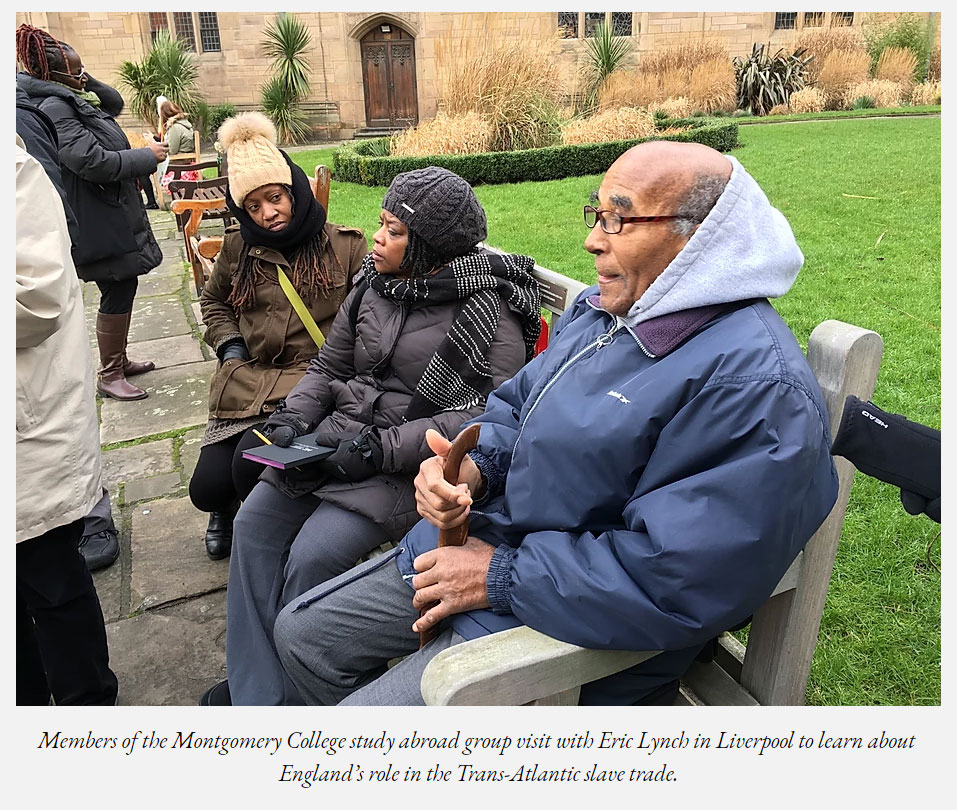 We've offered nothing better than the clichéd reasons that colleges encourage their students to study abroad. And yet, as one of the students, Miesha, said when Ellen saw her nine months after the trip to England, "I instantly began recommending study abroad to every student I met. There's nothing like it. You're like a new person. As a woman of African descent, I felt connected to a much larger community. It's good to know that the world is bigger than America, too."