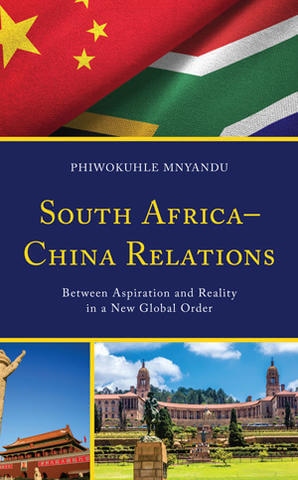 One of our China-Africa experts, a Howard University Joint Lecturer at the Department of African Studies as well as the Department of World Languages and Culture, Dr. Phiwokuhle Mnyandu, will have his book, South Africa-China Relations: Between Aspiration and Reality in A New Global Order, published on October 15, 2021.

This work is the first book about South Africa-China relations ever written by one scholar. Other works are either edited works of multiple scholars or about the more general field of China-Africa relations. The book was borne of research the author carried out in two provinces of China (Zhejiang and Beijing) and in South Africa.

In South Africa-China Relations: Between Aspiration and Reality in a New Global Order, Phiwokuhle Mnyandu analyzes South Africa-China relations in the context of South Africa’s quest to reduce unemployment and transform its economy to ensure lasting social stability. Mnyandu uses trade patterns, analyses of governmental organizations and initiatives, and other socio-economic data to determine the extent to which developmental change or stasis has taken place as relations between South Africa and China have deepened. Tracing South Africa’s changing attitudes and policies towards China’s involvement, the impact of programs involving commodities trades on unemployment, and the prospective outcomes of an endogenous developmental policy, Mnyandu concludes by proposing a quadri-linear model as a tool for more comprehensive analyses of China’s relations not only with South Africa, but other African countries as well to avoid di-information on Africa-China issues.

"China and South Africa have formed comprehensive strategic partnership, yet there are few studies on the history of the bilateral relations. This work comes up at the right time. South Africa has played a very important role in the South-South cooperation as a regional power and member of BRICS. Phiwokuhle Mnyandu has explored the bilateral relations of South Africa and China and exchanged ideas with scholars of both sides, thus providing us with this solid work with field research and theoretical approach combined. It will serve as an excellent guide to anyone interested in China-South Africa relations."
- Professor Li Anshan,
Foremost China-Africa scholar at Peking University

"A timely examination of dynamics that shape the relationship between China and Africa with particular reference to South Africa. It is a must-read for those seeking new insights into this epochal relationship."
- Professor Siphamandla Zondi,
Foremost scholar of South African foreign policy at the University of Johannesburg

"In the growing sub-field of China—Africa studies, few monographs have focused on bilateral ties between a single African country and China. Phiwokuhle Mnyandu’s new book begins to fill this gap with an ambitious work that begins with South Africa’s ties to dynastic China and a long period of what he calls “attenuated ties” during South Africa’s colonial and apartheid periods. The remaining five chapters focus on the growing “love affair” between Pretoria and Beijing, Pretoria’s version of a “Look East” policy,” and an analysis of South Africa’s prospects of successfully become a developmental state modeled on and assisted by China. As more and more scholars focus on African agency vis-à-vis their relationships with China, Mnyandu offers an honest, detailed examination of the myriad challenges facing the South African state in its efforts to make the most of their strategic ties with China."
- Professor Yoon Jung Park,
Foremost scholar of China-Africa migration studies at Georgetown University

To get discount, use code LEX30AUTH21 when ordering from Rowman & Littlefield.
* For individual use only and may not be combined with other offers and discounts, valid until 12/31/2021.