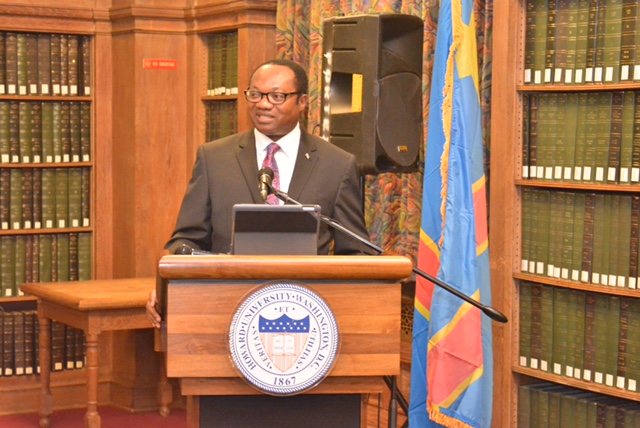 On March 2, 2017, "Howard University, in the capital of the US, organized a day of reflection on the situation in the Democratic Republic of Congo.

In order to stimulate thought, the American university has brought in the man who is raising the hope of a Congo more beautiful and stronger than before: Dr. Noël K. Tshiani, candidate for the next presidential election in the Democratic Republic of Congo, author of Noël K. Tshiani's Marshall Plan for the Reconstruction of the DRC and currently Senior International Officer at the World Bank in Washington, DC.

Dr. Noël K. Tshiani Muadiamvita addressed a wide range of audiences including the Congolese and African Diaspora and diplomats from African countries in Washington D.C., at the invitation of the African Union Ambassador to the United States of America, as well as, the US government and international organizations, private sector companies, and university professors and university students..."

"Given the failure of the development model followed by the DRC to date, the Center for African Studies at Howard University has taken the option of reflecting on the situation in the country. To avoid listening to the same recipes of the politicians who led the country to adrift, the African-American university invited Dr. Noël K. Tshiani to present Noël K. Tshiani's Marshall Plan for the Reconstruction of the DRC, which is his vision of development for the country to create opportunities, not for some members of his biological and political family, but for all Congolese without exception. Creating opportunities for everyone is not the language that Congolese politicians know because they see only their own interests..."

"As recognized by Marie France Cros, Noël K. Tshiani's Marshall Plan for the Reconstruction of the DRC is an undeniable asset for this presidential candidate. In his address to scholars at Howard University, Dr. Noël K. Tshiani raised the hope that another more stable, prosperous, equitable, better and more beautiful Congo is possible. As a starting point, Tshiani recognizes that his country is experiencing a catastrophic economic and social situation characterized by alarming underdevelopment, extreme poverty, endemic corruption, insecurity, poor governance, weak institutions, no coherent vision of development, a waning of attitudes, and the absence of democratic reforming leadership. Faced with the failure of the development model followed from 1960 to this day, the Democratic Republic of the Congo needs new leaders with a new vision of development to change the governance of the country..."

"Noël K. Tshiani's Marshall Plan for the Reconstruction of the DRC draws people from beyond the DRC. This time, at the invitation of the African Union Ambassador to the United States, the Howard University conference had active participation from the embassies of African countries such as South Africa, Angola , Tanzania, Kenya, Morocco, Cameroon, Senegal, Congo Brazzaville, and of course the Democratic Republic of Congo. The presence of US congressional support staff was also noticed..."

Read the entire article titled "In Washington DC, Noël K. Tshiani presents the Marshall Plan for the Reconstruction of the DRC" in La Prospérité​.