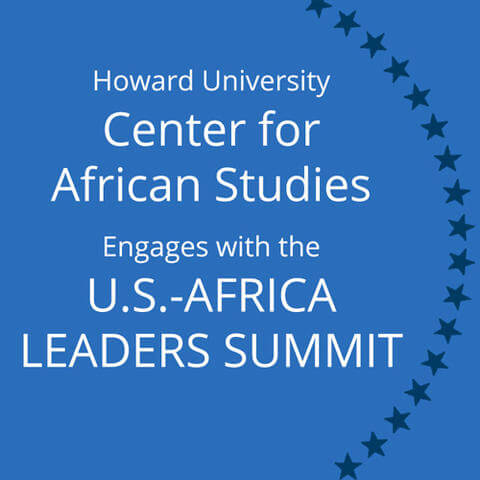 The Center for African Studies at Howard University led events and initiatives with diverse perspectives and diaspora voices in the conversation on the U.S.-Africa Leaders Summit which President Biden hosted on December 13-15, 2022 with leaders from across the African continent in Washington, DC.

The Center co-hosted three sideline events for the Summit together with political leaders, civil organizations and university partners. Recordings from the events are available farther below.

On the eve of the U.S.-Africa Leaders Summit, the Center for African Studies announced the launch of the African Languages Translation Initiative (ALTI) and the release of translations of the U.S. Strategy Toward Sub-Saharan Africa into Amharic, Swahili, Yoruba, and Zulu. ALTI will continue to encourage inter-cultural communication and understanding between Americans and Africans through the translation of documents, texts and information into critical African languages.

The Center also launched the HBCU-Africa Correspondents Corps (HBCU-ACC). HBCU-Africa reporters and commentators provided coverage before, during and after the U.S.-Africa Leaders Summit. HBCU-ACC will continue to provide student journalists and political scientists attending HBCUs with professional development exposure and experience beneficial to pursue a career as an international correspondent or political commentator. HBCU-ACC will also work to broaden and deepen networks between HBCU students and their counterparts in Africa and the global African Diaspora.

Conversation on Women and Trade: Advancing African and Diaspora Women in the Global Marketplace (Dec 12, 2022)