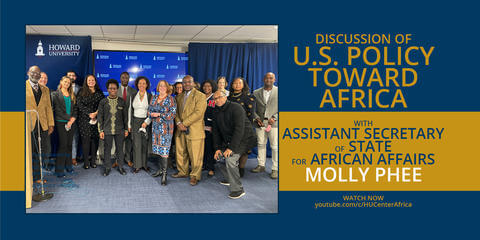 Watch this special event now on YouTube - Assistant Secretary of State for African Affairs, Molly Phee recently traveled with Secretary Blinken to Kenya, Nigeria, and Senegal on his first trip to sub-Saharan Africa as Secretary of State. The trip included a major policy speech in Nigeria, where the Secretary outlined U.S.-Africa policy under the Biden-Harris administration. On Dec. 15, 2021 at Howard University, as a follow-up to their trip, Assistant Secretary Phee offered remarks and then participated in a Q&A with Howard faculty, students and attendees.

Molly Phee, a career member of the Senior Foreign Service with the rank of Minister Counselor, was sworn in as the U.S. Assistant Secretary of State for African Affairs on September 30, 2021. She most recently served as the Deputy Special Representative for Afghanistan Reconciliation. She was U.S. Ambassador to South Sudan from 2015-2017. She previously served as Deputy Chief of Mission of the U.S. Embassy in Addis Ababa, Ethiopia, and as Chief of Staff in the Office of the Special Envoy for Sudan and South Sudan. Additionally she was the Acting Assistant Secretary for International Organization Affairs, as well as Deputy Security Council Coordinator at the U.S. Mission to the United Nations, handling UN engagement in Africa and the Middle East for both portfolios. Earlier in her career, Phee served on the National Security Council as Director for Iraq and as the Senior Civilian Representative of the Coalition Provisional Authority to Maysan Province, Iraq. She began her career at the U.S. Embassy in Amman, Jordan, and worked at U.S. Embassies in Cairo, Egypt and Kuwait City, Kuwait.

A native of Chicago, Ambassador Phee is a graduate of Indiana University and earned a Master’s degree from the Fletcher School of Law and Diplomacy. She has received the Distinguished Honor Award, the Robert C. Frasure Memorial Award for conflict resolution and peacemaking, the Baker-Wilkins Award for Outstanding Deputy Chief of Mission, the Secretary of Defense Meritorious Civilian Service Award, the Order of the British Empire Award, and a Presidential Rank Award. She speaks Arabic.