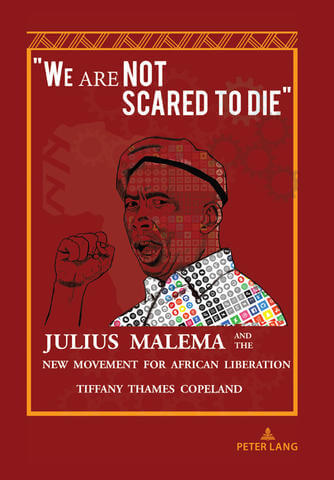 AUTHOR: Tiffany Thames Copeland, Ph.D.
BOOK TITLE: We Are Not Scared to Die: Julius Malema and the New Movement for African Liberation

The charismatic Julius Malema and the Economic Freedom Fighters (EFF) have descended onto the South African political scene like superheroes, vowing to liberate South Africans with their radical, militant, and revolutionary stance. Their pledge in fighting the four evils of this world including colonialism, imperialism, racism, and sexism, has given them an allure of being saviors while striking fear in the hearts of the white monopoly capitalists including their African conspirators, labeled sell outs.
The nexus of this book comprises of two social media studies on Malema’s eye-opening, controversial, and at times humorous rhetoric—and his audience’s unfiltered reaction to it—during the 2019 South African general election season. Malema’s discourse is also assessed from South Africa’s historical, cultural, and socio-political environment, with special attention given to the poor black majority.

The EFF is part of an international protest movement, and connections are, at times, drawn between the South African and the African American experience—both of which have been severely impacted by an international system of white hegemony.

Ultimately, this research shows that Malema’s fiery and witty rhetoric has firmly situated the EFF at the forefront of a new movement for African liberation. As Malema said, "The time for reconciliation is over, now is the time for justice," solidifying him as one of the most controversial political figures in South Africa, Africa, and perhaps one day, the world over.

Tiffany Thames Copeland, Ph.D. is a professor of communications at Montgomery College. She earned her doctorate of philosophy degree from Howard University's Communication, Culture, and Media Studies department in 2020.